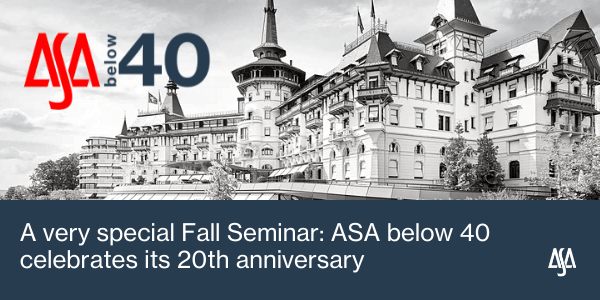 ASA below 40 made a comeback with its first in-person event after a COVID-forced hiatus of more than one year. The Fall Seminar “BACK TO THE FUTURE – Old problems, new solutions?” was held on 22 October 2021 at the Dolder Grand in Zurich. This was a very special seminar, as this year ASA below 40 marks the 20th anniversary since its creation in 2001. The ASA below 40 co-chairs, Catherine Kunz, Flavio Peter and Catrice Gayer had the pleasure of welcoming approximately 100 persons from Switzerland and beyond, including the ASA President and many former co-chairs of ASA below 40 as special guests.

The seminar was kick-started by former co-chairs Anne Véronique Schlaepfer (White & Case), Gabrielle Nater-Bass (Homburger) and Philipp Habegger (Habegger Arbitration). All three gave unique insights into the genesis of ASA below 40, the original motivations to form such group, their first challenges and the core values that ASA below 40 still pursues.

The floor was then given to the first panel with the title “How to deal with fabricated and illegally obtained evidence”. Moderated by Michele Curatola (Clifford Chance), speakers Florence J. Jaeger (Homburger) and Davide Colacino (LustenbergerPro) addressed these two issues not only from a purely arbitration perspective, but also by drawing very insightful comparisons from domestic litigation and criminal proceedings.

Next, as a “Special Anniversary Treat”, ASA President Felix Dasser was given the floor. Felix Dasser stated the importance of setting now the course to shape arbitration for the future. He emphasised the crucial role of ASA as an association which not only “thinks”, but also “acts”.

After Catherine and Catrice had summarized the key take-aways of the panels and the fireside chat, it was time to bid farewell to Catherine as this special seminar marked her last event as ASA below 40 co-chair. Jointly with two former co-chairs, Olivier Mosimann and Anna-Maria Tamminen, the current co-chairs thanked Catherine for her outstanding and high-quality work, her many inspiring initiatives and her passionate dedication which shaped ASA below 40 over the last three years.